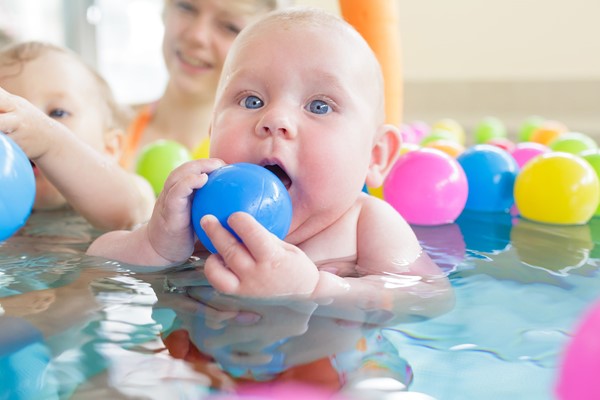 Teaching babies to swim turns out to be more than just fun. Baby swimmers have better balance and are also better at grasping at things than non-swimmers. This difference persists even when children are five years old, when babies who have been taught to swim still outperform their peers, research from the Norwegian University of Science and Technology (NTNU) shows.

Now Sigmundsson and Brian Hopkins, a professor of psychology from Lancaster University, have shown that baby swimming is good for developing balance and movement in infants and young children.

The baby swimmers had participated in swimming classes for two hours a week from the age of 2-3 months until they were about 7 months old. A typical session might involve helping the baby do a somersault on a floating mat, having the baby dive under water, jump from the pool edge, and balance on the hand of a parent while reaching to pick up floating objects.

At approximately age 5, both baby swimmers and the control group were tested with similar exercises. The exercises included walking on tiptoes, balancing on one foot, skipping rope, rolling a ball into a goal and catching a beanbag. The results were crystal clear, the researchers say.

“We saw very clearly that baby swimmers were the best in exercises that related to balance and the ability to reach for things,” says Sigmundsson.

The survey took place in Iceland, which is Sigmundsson’s homeland.

“Water is as important to Icelanders as snow is for Norwegians. A typical Icelander swims on average once or twice a week, and there is great deal of interest in baby swimming. I know an instructor who has been teaching baby swimming for 20 years. He had a great deal of information about children who have participated in swimming courses. So it was natural for us to conduct the study in Iceland,” Sigmundsson says.

Sigmundsson says he was simply overwhelmed by what the instructor was able to get the babies to do.

“The instructor was able to bring three-month-old babies right up to a balanced position, standing on his palm. The babies locked joints — it was amazing to watch,” Sigmundsson says.Top of Form

The study was published in the May 2010 issue of Child: Care Health and Development.